I wanted to edit the default Cessna 172SP airplane in X-Plane 10 to include an HSI, and a DME. I used Plane Maker to delete the standard DG, and insert a general aviation HSI linked to NAV1. It didn’t really fit in between the other instruments, so I moved them a little too.

I delete the standard CDA NAV1 head, moved NAV2 up to NAV1, and moved the ADF up to the NAV2 position. This gave me pretty much the same panel configuration as the Frasca 141 simulator I have been taking some flight lessons in.

I did a “Save As” to save the plane as a different name (for safety). When I loaded up the plane in X-Plane to fly it, I saw strange shadows / ghosts where the moved and deleted instruments previously were. This led me on a search for the answer to this mystery.

It turns out the makers of the original Cessna 172SP plane in X-Plane cleverly added an overlay of “glow” to the original set of instruments. The “instrument” in the plane maker Hierarchy list is called “gen_rotaryPANEL_LIT” and it uses the image cockpit/generic/panelnight-1_LIT.png to overlay the “glow” based on how much the panel lights are turned up. It’s most visible in X-Plane with night lighting.

The glows in that PNG file were positioned where my instruments were before. I editing it in GIMP to have the right glows in the right places, and I removed the extras I didn’t need. (Before I did that I made a copy of the entire Cessna172Sp aircraft sub-folder in case I messed something up.)

A simpler solution would be to remove the panelnight-1_LIT.png image from your cockpit/generic folder. You’d lose all the glows, but save a bunch of editing trouble.

Hope this info saves you some time and frustration.

Here’s the final result in all it’s glory. 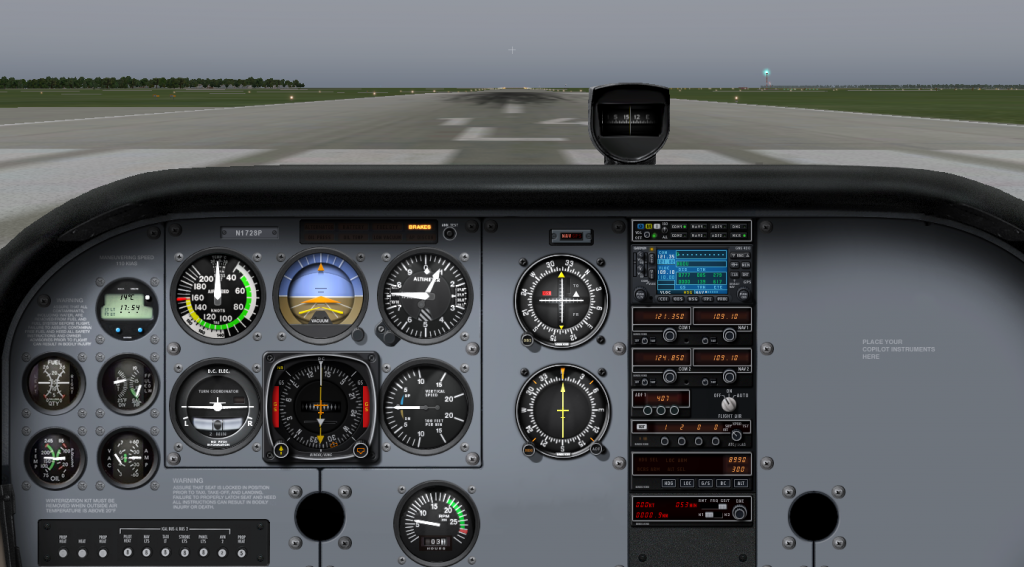 The rubber boots on the rudder pedals of the 1979 Piper Archer II I share ownership of were falling off. They were originally glued to the metal pedals.

My first attempt at repair involved contact cement from the hardware store. I scraped the rubber and the metal surfaces as best I could, applied the contact cement, and pressed them together. After a few minutes it was clear they weren’t sticking.

I made some upgrades for attempt #2. I ordered some 3M 1300 neoprene contact cement. I bought Methyl Ethyl Ketone solvent from Home Depot for cleaning the surfaces, and I brought heat.

I washed the rubber boot in hot water because I knew it had been exposed to brake fluid last year. I warmed the metal pedal and the rubber boot with a hair dryer. (It was 56 degrees F in the hanger. 3M recommends 65+ degrees for the 1300 cement. I probably warmed them to 85 degrees.) I wiped down the boot and the pedal with the MEK solvent. I applied the 1300 cement, let it dry for a couple of minutes, and pressed the pieces together.

The bond was instant and as of a couple of weeks later it’s still holding fast. I gave the same treatment to two other loose rudder pedal boots, and they are now solid as well. Hope this info helps someone with the same problem.